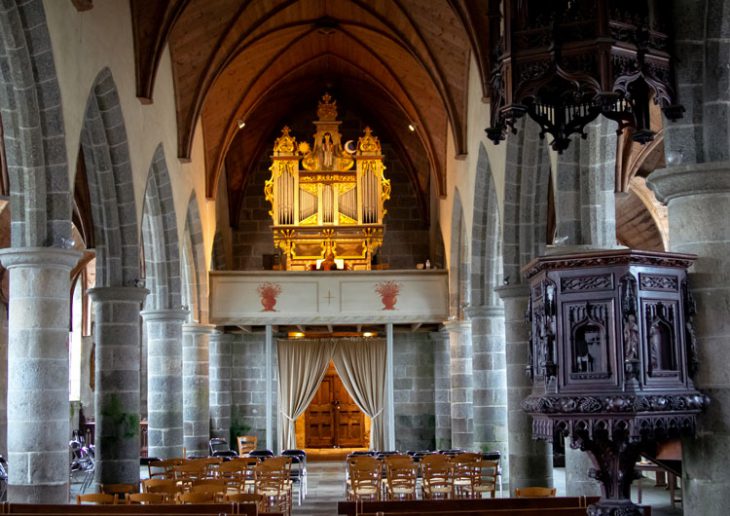 The Academy proposes to discover several historic organs in the vicinity, and particularly the historic organ of Lanvellec by Robert Dallam, 1653:
The only 17th century English pipe organ fully kept in its original state in France consists of a single manual of 48 keys (4 octaves from C1 to C5), coupled pedal-board of 19 notes. Pitch: A390 Hz, 15°c. Temperament: mean-tone. Restored in 1986 by Barthelemy Formentelli and classified as a French Historic Monument.
Now kept in Lanvellec, the instrument was built originally for the nearby church of Plestin les Grèves in 1653 by Robert Dallam, an English organ builder who had fled England and found refuge in Brittany.
He was the son of Thomas Dallam, who had received royal commissions for the organs of King’s College Cambridge, the Cathedral organs of Worcester and Wells, and Eton College.
In 1642, as the Civil War was ravaging the kingdom of England and the Puritans forbade the use of organs in churches, Robert Dallam and his family were compelled to seek refuge in Brittany (others went into exile in the Americas). Catholicism and tight bonds between Britain and Brittany, primarily due to the linen trade, were the reasons for the Dallams’ relocation in Morlaix.

From there, he carried out multiple new commands in Brittany: the big and sumptuous Quimper cathedral organ, those of Saint Jean du Doigt, Plestin les Grèves, Lesneven and repair work at Landerneau.

The restoration of the Stuart monarchy in 1660 with promises of tolerance given by Charles II, allowed Robert Dallam to resume his activity in England. Therefore he went back with his youngest sons, building instruments for Windsor St George’s and 2 Oxford colleges. Thomas, his eldest son (born around 1630, before the exile) decided to stay in Brittany, took the name of Thomas de la Tour and built organs up to 1700 (St Pol de Léon, Guimiliau, Ploujean, St Melaine de Morlaix, Pleyben, Sizun).

On May 30,1665, Robert died in Oxford. He was buried in New College where we can see his grave in the Cloisters.

In Plestin, the organ received a new keyboard from a local organ builder, Herland. (Appended signature on keyboard now hanging on the west wall behind the organ).

In 1857 and 1858, construction work started at the church of Plestin. Instead of dismantling the organ, it was covered by sailcloth. During a storm, rain went through the sailcloth and the organ was dramatically damaged. Heavily indebted the parish sold the organ to Lanvellec for the sum of 1,000 francs. The organ was set up in Lanvellec in 1864 for an additional 1,000 francs.

Only the case and the 39 front pipes were placed back. Left in disrepair, the instrument decayed slowly and had 2 complete stops  “amputated” in the 1930s. To avoid further looting, the organ pipework was classified as a French Historic Monument on March 25th 1971 and the case on July 18th 1977.

By chance, in 1984, the 150 missing pipes were retrieved. The recovered pipes returned to their rightful places inside the organ. This was confirmed by the handwritten marks left by Robert Dallam himself.

All the other instruments of Robert Dallam in Brittany or England have been altered beyond recognition. All the British ones have been transformed during the 19th and 20th centuries. Therefore, the Lanvellec organ reveals itself as the oldest in Brittany and one of the most ancient in France and unique as it is the only authentic existing Robert Dallam artwork. Although modest in size, it is historically and musically of a considerable importance. It is a now a unique instrument in the world.

The case, dated 1653, polychrome and gold plated is in a perfect state. The front follows the pattern of King’s College, Cambridge.

The restoration revealed 2 small painted landscape panels, probably dating from the 18th century. The ornamental statue in the top niche was dedicated to St Brandan before restoration. It has since then, regained its rightful name of St Efflam. He was the patron saint of Plestin-les-grèves. The revolving Sun and Moon, whose presence was suspected during the dismantling operations (2 empty valves) have been recreated. The restoration works were awarded, after adjudication, to the organ maker Barthelemy FORMENTELLI from Pedemonte in Italy. The exceptional quality of most of the stops (marks, letters for the note, number for the spot on pipe-racks), minimal alterations over time, the uniqueness of such a discovery led to total respect of the instrument during restoration.

Started in April 1985 and finished in September 1986, the restoration has given back to the instrument all its historic authenticity with its original pitch (ancient: 1 tone ¼ below modern one: 391Hz at 15°, certified by all the pipemarks) the exact colour tones and stops in a meantone temperament (softened) perfect to illustrate the baroque musical language. “The recovery of the original voicing” (to quote B. Formentelli) has been possible thanks to the good pipe preservation: original pipe toeholes, mouth heights, state of flues and languid bevels. These voicing features determine a type of voicing that is not reinvented but rediscovered. The wind pressure has been adjusted to suit the pipe features.

The Lanvellec organ is the ideal organ for ancient music and the polyphonic language, richer with colourful brightness rather than effects. The instrument suits perfectly all the repertoire of the 16th, 17th and part of the 18th century, as long as the organists chooses the right pieces. The tone may seem, to the unused ear, a bit rustic, with a slight sh-sound, but authentic. The organ by its brilliance, clarity, velvety sound, its tone power and fullness of its plein-jeu, is as much a solo instrument as a guide for singing voices, as it was played in the 17th century, a witness to 17th century taste in a rural parish in the Breton Tregor.